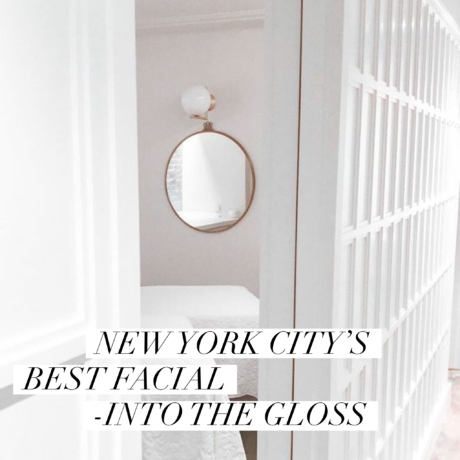 “I’m standing in the middle of a room struggling with the snaps on a terrycloth cover-up. It’s a Saturday morning and I’m at Rescue Spa in New York City, its brand new, dazzling (and huge) location on 19th Street. Danuta Mieloch, the spa’s founder and owner, is about to give me a facial in what is to be my very first encounter with Biologique Recherche. I’m nervous, I’m excited, and then—once I’m snapped in—comfortably cozied up beneath warm sheets as Danuta gets to work on my face. Just over an hour of consulting, cleansing, steaming, toning, balancing, massaging, and micro-current-ing later, I emerge as if in slow motion from the immense facility doors and down Park Avenue. I can feel my face glowing. Even if it stinks of Biologique Lait Crème (reminiscent of an NYC sewer) it was worth it; my skin hasn’t looked or felt this good in ages.
I’m not surprised, though. The recommendations for Biologique Recherche can’t come through the Into The Gloss comment section fast enough. (In fact, whenever we link to the products, it’s usually to Rescue Spa’s ecommerce site—very few places carry it online.) In the days following my appointment, every time I caught a glimpse of myself passing a mirror, I had to do a double take, thinking Wow, the lighting is really good in here before realizing that it was actually just my skin. I can’t speak to the rest of the spa’s offerings yet—it flaunts a nail salon (whose fireplace literally used to belong to Jackie O), a beverage bar, a hair salon, and endless massage rooms—but I probably will sooner than later. I already can’t wait to go back.” —Anna Stevenett
“I actually don’t love facials. Something about them makes me anxious. I like to be in control–of my time, of my products, of my extractions. But I would wholly give myself over to Danuta anytime I’m in need of a little skin rejuvenation from here on out. The hour-plus I spent with her during my Bio-Lift facial bent the linear notion of time and I felt like I was there being pampered for days on end. I could give you a number of reasons why this facial goes down in my book as unparalleled, but I’ll pick the most important one: extractions that don’t leave any redness. Seriously. They didn’t even hurt! That’s worth a lot in my book.
But really folks, talk to any 10 facialists in New York and emerge with at least 15 different opinions about what you should do for your skin. It’s a hard world out there for a beauty editor just looking for truth. But Danuta didn’t try and impart any new tenets on my skin—in fact, she said it looked pretty good! (Never underestimate the value of positivity on your ‘glow’.) She used a handful of things I don’t normally mess with on a daily basis—microdermabrasion and P50—but not in a scorched-earth attempt to rid me of having skin in the first place. Too much of that and you’ll end up with a complexion that doesn’t quite know what to do with itself. None of that at Rescue Spa. I glowed when I left; I glowed even harder three days later. And did I mention the extractions didn’t leave me with any redness? Because really—that’s golden.” —Emily Ferber